We’ve all watched as Amazon, Google, Facebook and the rest of Big Tech have left brand managers scrambling to catch up with a quickly changing advertising landscape. The growing influence of the consumer’s voice in an always-on digital environment has caused consumers to rethink the way they research, buy and experience products.

OLD VS NEW, FUNNEL VS JOURNEY

For years, companies approached marketing through the time-tested marketing funnel. This theoretical tool was first introduced in 1902 (you read that correctly, companies are still using a tool invented over 100 years ago to understand modern consumers) and maps a theoretical purchase path from the moment a brand or product attracts a consumers attention to the point of purchase. The sequence of the funnel (in its various forms) has morphed from Awareness-Consideration-Purchase to Awareness-Consideration-Purchase-Loyalty-Advocacy. For the past century, companies have stuck with the model, pouring their energy into traditional awareness campaigns with loyalty and advocacy efforts stitched in separately. This old model was fine if your only consumer connections were billboards, TV ads, print ads and the like, but the communication falls apart quickly when you put it through the lens of the ever-growing and changing online and offline marketing experience. 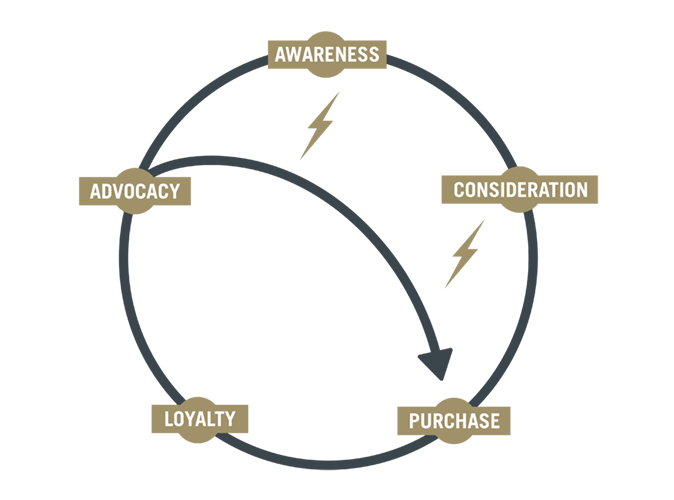 In the past few years, we’ve witnessed challenger brands disrupt leaders across all categories. From consumer packaged goods to outdoor/enthusiast brands, no one is safe from the shakeup. Much of the success of these challenger brands can be attributed to their ability to generate Brand Action. At SixSpeed, we use the term Brand Action to describe the energy created by brands who have disrupted the traditional consumer decision journey and are winning where it matters most.

HOW THEY ARE WINNING

The result is a fast-growing brand which is stealing a disproportionate amount of market share and may even be growing their category by drawing in new consumers.

IMAGINE THE TOP FOUR BRANDS IN A CATEGORY

Starting in the middle, brands in positions two and three often see their marketing efforts caught in a tug-of-war between the fight against the pure power of the leader in the traditional channels and the challenger’s dynamism in the new media channels. Their straddle often causes them to have me-too follower strategies that hinder true differentiation in the category.

The leading brand has established distribution and has healthy enough budgets to allow it to ‘win’ with traditional media dollars. They also invest in new media strategies like content marketing and influencer marketing, but often fail to gain the tacit understanding needed to activate the ‘grassroots’ when they approach the work from their top-down perch. The chances are good that if you’re the company spending the most on advertising in your category, you also might be the one who’s in the most trouble.

By contrast, the fourth position challenger brand often generates its Brand Action out of necessity and has built their platforms during the rise of these new methods. They typically aren’t hampered by historical distribution or marketing paradigms, and most don’t yet have big enough budgets for large traditional media reach. These brands have generated huge online and offline audiences of loyalists who will advocate for the brand endlessly because they know the brand understands them in a way that other brands in the category don’t.

Sparked by mobile tech and accelerated by the arrival of the iPhone, the advertising world saw a shift toward the breakdown of traditional media. Curated “best of” lists, reviews, and one-click buys put consumers ever-closer to products by condensing the awareness and consideration steps of the consumer journey into a streamlined purchasing experience. These new challenger brands have relied on an entirely new marketing mix with more unique engagement for their modern consumer to interact with online and offline—often blurring the lines between the two.

The brands that are doing it right understand that consumers’ dollars are being spent more on brands that show up authentically in the spaces their audiences consume content. Instagram, Facebook, Amazon, Google Search, live, experiential, advocacy, word of mouth, and influencers have allowed brands to bridge the ocean between their products and consumers. Brands like Tesla, YETI Coolers, Dollar Shave Club, and Sitka Gear overtook the mindshare of their competitors and accomplished it largely without spending a dime on traditional advertising. Chances are you have a challenger brand in your category, or one is being born now, that will unseat your lead brands.

STEP ONE: BE AUTHENTIC

These brands show up in authentic ways. You do not decide what your brand is, your consumers do. A brand is authentic when its brand identity—what it espouses itself to be via its product, actions, and marketing—aligns with its brand image—what people perceive the brand to be. 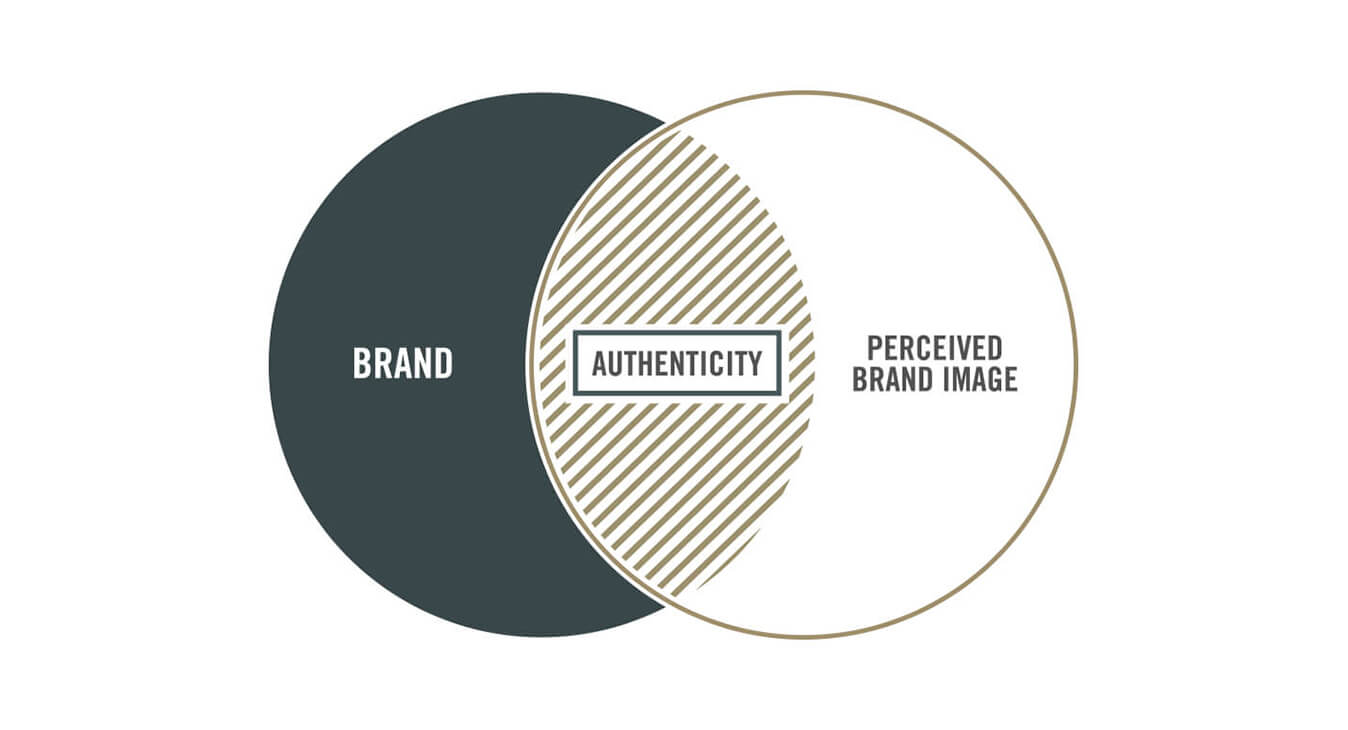 Simon Sinek nailed it in Start With Why: “People want to do business with companies who believe what you believe. People don’t buy what you do; they buy why you do it.” These brands articulate their purpose and beliefs. They stand up for what they believe in and work with consumers to activate and invest in those beliefs. Consumers want to know what a company believes in order to assess whether it aligns with their self-identity.

Finally, these companies connect with core users whose self-identities help drive conversation within the communities that matter most to their brand’s category. These conversations help to influence the decisions of the group in ways that fuel advocacy. 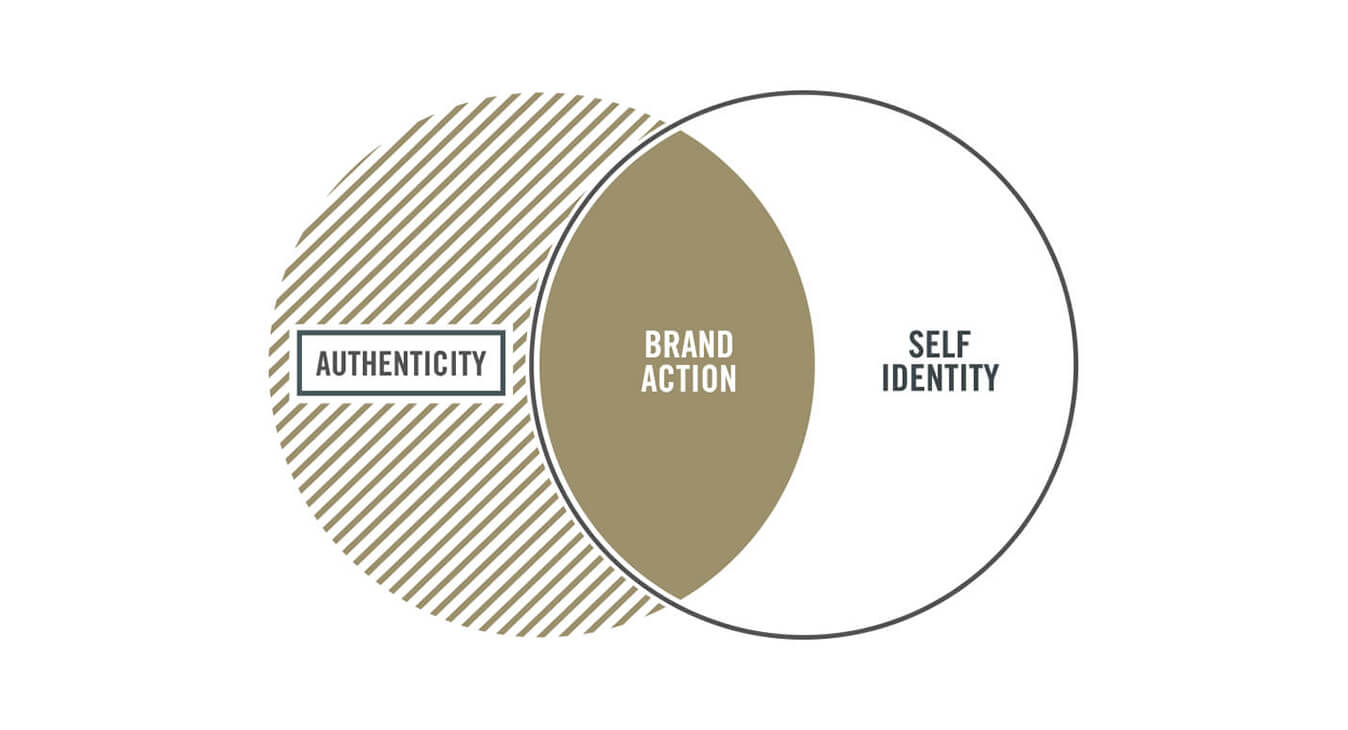 All too often, most brands stop before their Brand Action even starts. Companies who have suffered at the hands of their challengers are often the brands who have invested too heavily in traditional media and haven’t built the metabolism to discover how their brand should show up in the hearts and minds of their advocates. Without this knowledge, investing in new media while sustaining or hopefully improving your ROI becomes increasingly more challenging.

Building Brand Action might seem simple in concept, but it can be complex and takes discipline to realize. Just like anything, success is in the execution. Brands who do it right show up differently and more powerfully across connections that matter most—so that unstoppable brand action is driven by a series of expectations and beliefs fueled by their most dedicated consumers.

If it is time to rethink your strategy, drop us a line and let’s discuss how SixSpeed can help.

Ready to shift into high gear?